I have been barnstorming on my other blog, Glimpses, but I have saved the cream of the cropped for my art blog here. 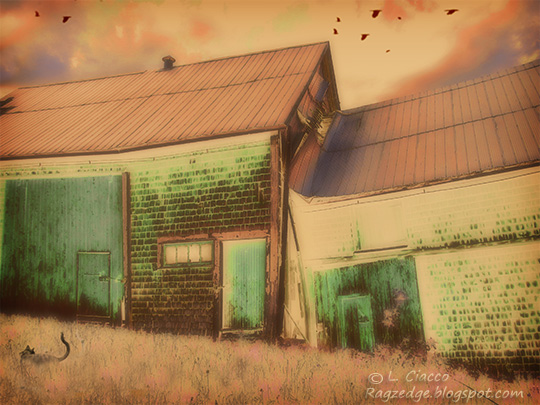 This is a very romanticized version of a double barn I photographed not far from where I live.  Thanks to some free "brushes" I found online, I added the birds to the sky and the cat in the field of tall grasses in Photoshop.  If you'd like to see the more prosaic versions of this intriguingly sagging barn, pop on over to Glimpses for a variety of views.


Thanks for stopping by!

A little too flowery?

What better model than a flower? Full of colour and life, not at all camera shy--and offering all sorts of exciting possibilities for creative editing.

Flowers have long been popular subjects for painters, including myself. But in this instance, I have turned a photograph into what I hope looks like a chalk pastel drawing. I love working with pastels, though they do get terribly messy (at least in my hands). Working digitally, bending and blending the pixels with the smudge tool in Photoshop, I can get a very similar effect to chalk pastels without all the dust. This was a brand new discovery for me--very excited about it! 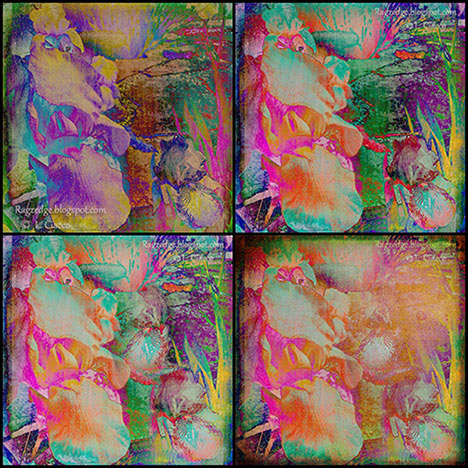 Here's a collage of four of the versions/experiments I made along the way, just trying different filters and textures in Photoshop. 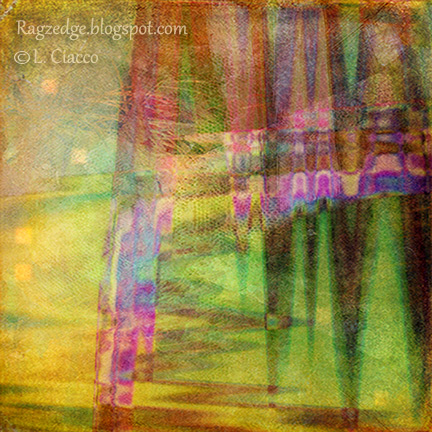 This highly abstracted version still has an element of painterliness to it, hinting at a highly textured, mixed-media canvas. 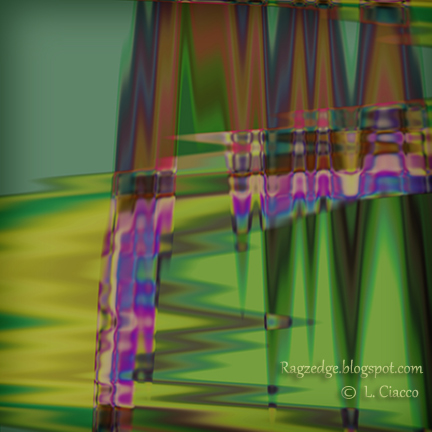 Pure abstraction! Created with applying the Wave filter in Photoshop (applied blindly, I might add.  "Whack it on there and see what happens!" is the technique used). 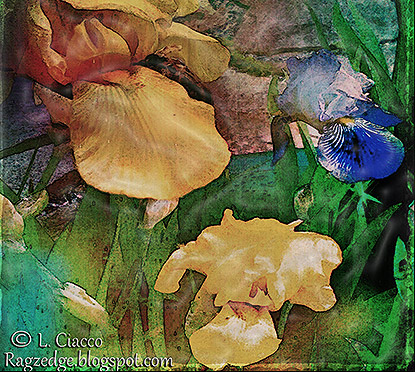 This is the photo that I used to make all the above images. It was already cropped and had several filters applied to it, including plastic wrap (helps keep the flowers fresh). 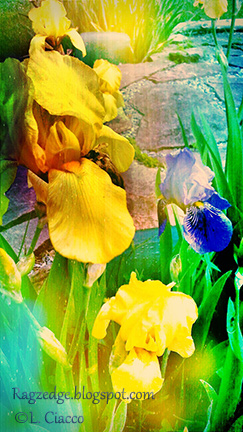 And this is the photo where it all began, taken with my Asus tablet using the 'Little Photo camera' and the 'HDR-FX' apps.


Go ahead and ask me if I'm having fun yet!

Joining up with Nature's Footstep abstract meme today.  Pop over there to treat yourself to other participants' digital art.
16 comments

Looking at this image gives me the same sort of feeling as gazing at a mandala: a feeling of concentration, being centred and focused.  There seems to be an intense, small face right at the apex of the bouquet, gazing intently back at me, exuding energy. Below the face, the heart-centred body, directing the energy both upwards and downwards, grounding and liberating. At least, that's what I see. And you? 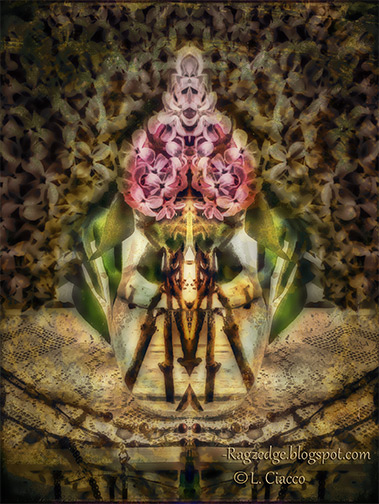 This piece was made from a photo of a vase of lilacs, taken with my Asus tablet, treated to a mirror image effect with the PicsArt app, imported into my laptop computer and worked on in Photoshop.  Making it was a meditation in itself.

(or in other words, obsessing and having too much fun!)

Something new for me...using a model supplied by some generous folks at Deviant Art to create an otherwise original photo-painting. 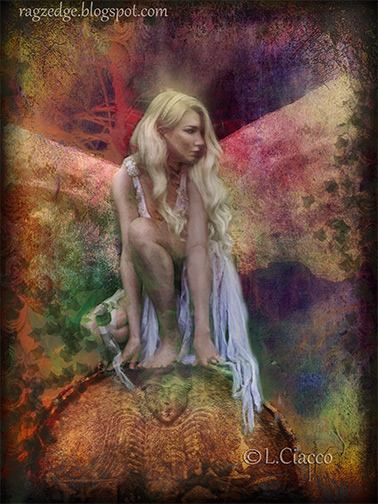 While it did feel odd to use another photographer's work (Helle Gry, no link available) of a model unknown to me (Maria Amanda), it was terrific fun to work on making it my own and creating a different context.  Please go here to see the original photo that I borrowed.

This is another version that I posted on my Facebook page, Offerings. 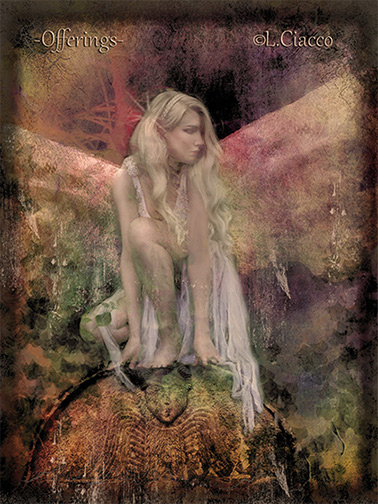 There are other versions that happened along the way as well; the process provided a most rewarding realm of experimentation, discovery and learning.

Of course it would be great to have one's own model to dress up and pose, but barring that, this alternative will have to suffice. There is also the distinct possibility that these digital "photo-paintings" could be a jumping off point for making works of paint on canvas or paper. Already I'm thinking of this as fodder for a card in my presently stalled Tarot Series, which are all hand drawn and painted. (I would link to the Tarot Series here but for some reason the pictures are no longer showing, doubtlessly due to some diabolic Google+ machinations!)

Anyway, I hope someone out there likes this detour I took.
I'll be flitting around to visit my blog friends very soon--
am looking forward to seeing what directions you're flying!

As much fun as it is to play with my tablet, it's good to get back to working on its big brother, my laptop.  (Somehow, I've given up on my desktop computer as it's gotten lugubrious and slow, not to mention how it gets a sadistic kick out of turning itself on and off at random!). 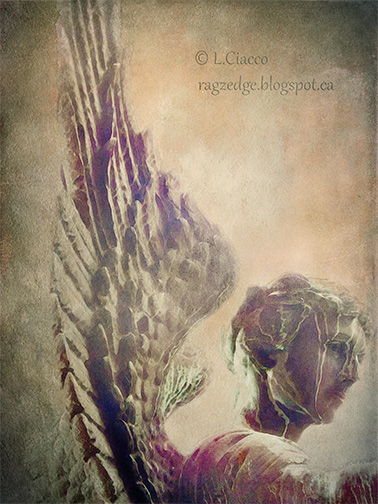 This image was made from a photo I took in late winter of a statue in Vancouver, zooming in for a close-up of her face.  The photo itself is quite washed out, giving me lots of opportunity to apply various textures and blending modes in Photoshop to create something original...not painting, not photography, but digital art. 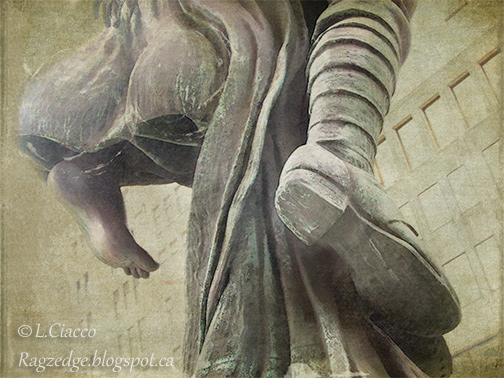 At the bottom of the same statue, we see one foot of the angel and one boot of the soldier she is carrying off. Windows of a neighbouring building witness their ascension. 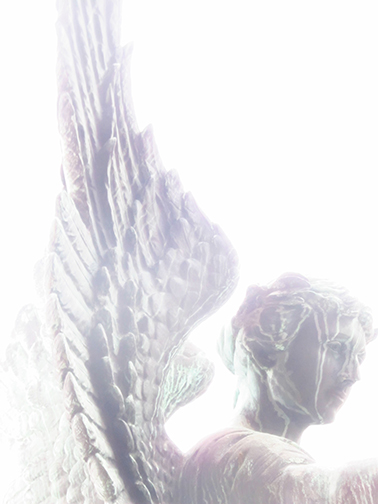 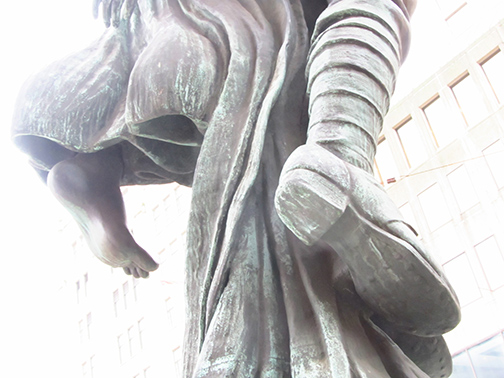 Here are the two original photos. 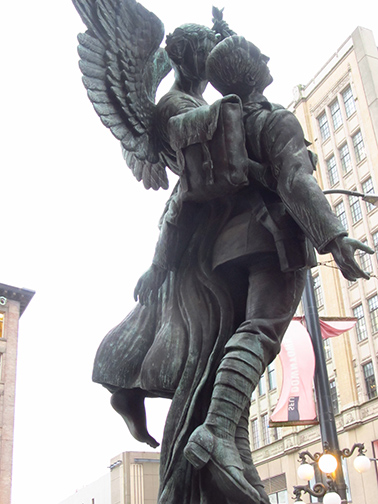 And this gives you an idea of the full statue,
Winged Victory by Coeur de Lion MacCarthy. 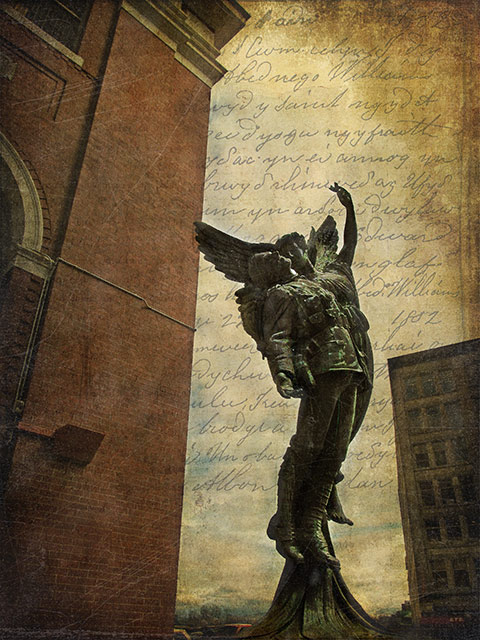 Yet another version of this intriguing and emotionally moving statue,
an artwork I made a few years ago.
I suspect I will make a few more digital art pieces
based on this sculpture.

Can you blame me?

A little cartoon, a quick morning squiggle, that I hope you might find uplifting. Made on my tablet, using an app called WaterColorPencil.

What it's all about:

Painting, mixed media, digital art, flirtations with textiles, a love-affair with texture, and random ruminations on what it is to be an artist. PLUS! an illustrated *Maxim of the Week every Sunday. (*Maxims presently on strike but you can click on the tab at the top of the page to see a few hundred oldies but goodies!)


Studio Guests: Comments are works of art in themselves. Please leave your mark

Visti my home and away blog : 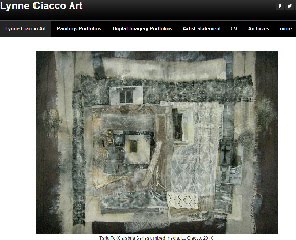 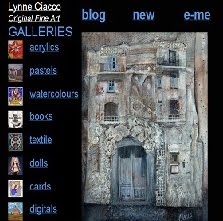 Click on image to visit some blasts from my artistic past